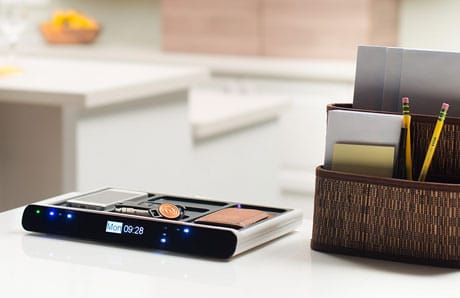 US startup Ocho has unveiled an NFC tray that enables messages to be automatically sent to users, family members and colleagues when a key, wallet, phone or other NFC tagged object is placed on the device.

The US$38 Ocho Mini and US$68 Ocho Pad work in conjunction with NFC tags, a mobile app and a cloud-based platform and use a concept the team calls “UnTouch” to enable alerts to be sent out if an event — such as placing a set of keys on the device — does not take place at the expected time.

“We all know that magical things happen when an NFC tag touches an NFC reader, doors open, turnstiles spin, payments are acknowledged,” co-inventor Ken Mages told NFC World. “But what happens when two things that are touching each other or are supposed to be touching each other suddenly are not?”

Using the UnTouch concept, he explained, “we can trigger events when a key is touching Ocho or when it is not. I can remind myself at 8pm that my wallet is not where it ought to be instead of having to search for it after I’ve left home.

“I can set an alert to remind my wife that I will be late for dinner when she touches her keys to Ocho or I can know she has left home when her keys are removed from Ocho. This ‘automagic’ notification is incredibly simple and powerful.”

As well as using NFC to detect the arrival of items on the devices, Ocho trays include WiFi to communicate with the cloud backend and infrared sensors to detect when objects are removed.

Ocho is based around an open, cloud-based platform that developers will be able to use to create additional use cases, the team says. “When programmers around the world put their heads together, their imagination is the only limit to the usefulness of the Ocho ecosystem,” they say.

The team is seeking US$35,000 in crowdfunding via Kickstarter to put Ocho into production, with fundraising due to begin on 26 March.