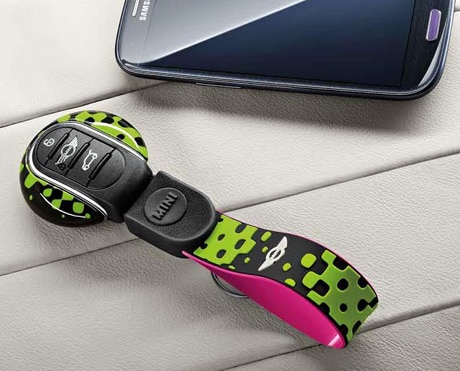 Buyers of the new Mini F56 will be able to customize the design of their car key by choosing an official aftermarket ‘key cap’ that supports NFC and will be available from Mini dealers worldwide.

The key caps incorporate an NFC tag which the driver can use to initiate actions on a mobile phone using any of the many ‘task trigger’ apps available.

“On one side of the clip, marked by a slight elevation, an NFC transponder is built in, which is programmed with various actions and activities via free apps available from the app stores of the operating systems Android, Windows Phone and BlackBerry,” says Germany-based Smart-Tec, manufacturer of the key cap’s NFC transponder. “This is a quick and simple process that the Mini customer can do him or herself.”

The NFC key cap incorporates NXP’s nTag203 NFC chip to provide it with “sufficient memory to store a wide range of different actions” and will be available from Mini dealers worldwide at a cost of around €25 (US$34).

“A large number of scenarios and examples of applications can be carried out in practice using NFC transponders and NFC-enabled smartphones to speed up and simplify everyday tasks, functions or actions,” says Smart-Tec.

For example, the company suggests, “the driver gets into his of her Mini and holds his or her NFC-enabled smartphone briefly on the car key. The Bluetooth connection is immediately activated, the read-out mode for incoming texts is enabled and the navigation app is launched.

“This is achieved by means of a one-time set-up process using a free app which stores the functions ‘activate Bluetooth, enable driving mode, launch navigation app’ onto the NFC transponder.”