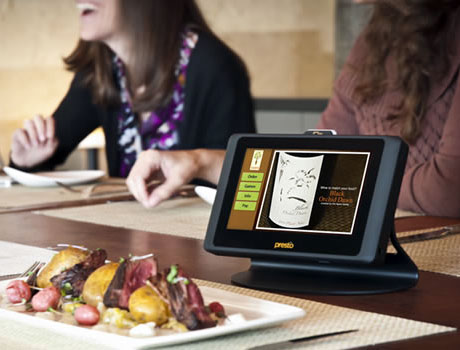 NFC is to be included in 100,000 tabletop tablets that are to be installed in US casual dining restaurant chain Applebee’s 1,800 locations. The tablets, supplied by software provider E la Carte, will be on every table and multiple bar positions by the end of next year.

E la Carte’s Intel-based Presto tablets enable diners to add to their orders, pay and play games from their seats. The support for NFC will enable Applebee’s to “seamlessly transition to opportunities for mobile wallet and mobile phone interaction and more,” the companies say.

The rollout follows a pilot program where Applebee’s found that the tablets significantly reduced transaction times and provided a “better overall experience” for guests. The technology is now being considered for introduction at Ihop, a restaurant chain also owned by Applebee’s franchisor DineEquity.

During the next eighteen months, enhanced functionality such as video streaming, music, additional games, social media interaction with Applebee’s Facebook community and personal pages, sharing, and gift card sales features will be added.

“Starting out, our goal was to create a way for guests to control when and how they pay their check,” Applebee’s president Mike Archer explains. “What we learned after nearly two years of testing is we can provide much more. The Presto tablet will deliver our guests a robust slate of offerings for not only transactions, but entertainment, social interaction and more.”