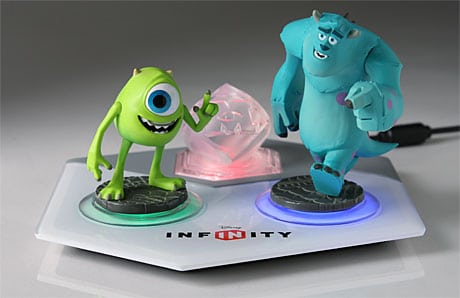 Disney Infinity, the NFC figurine based multi-platform video game, has begun shipping worldwide. Disney Infinity allows gamers to add characters and scenarios to their gaming experience by placing a figure or a Power Disc on an NFC reader pad.

Multiple Power Discs can be placed under a figurine on the reader to give that character extra abilities in-game.

“Disney Infinity uses modern NFC technology to allow the figures to communicate with the game itself. Each figure has the ability to store data, and to operate on pretty much any platform,” Disney told NFC World.

“Players can play with their interactive character figure on Xbox 360, then take it to a friend’s house and play on a PS3 and still have the same experience and economy levels.”

Each US$75 starter pack includes the NFC base, three characters and three game worlds to get gamers started, but can be expanded with additional figures from a host of Disney titles.

“With this innovative approach to gaming, Disney Infinity will bring to life new characters, stories and environments from The Walt Disney Company over time in a way that will delight fans and gamers alike,” said Disney Interactive co-president John Pleasants.

“Players can access their own Toy Box and build and customize their own unique virtual world using their favourite characters, vehicles, settings and accessories,” says Disney. “Disney Infinity allows players the opportunity to share these unique creations in the Toy Box mode with friends both online and off.”

Disney Infinity is available for Xbox 360, Playstation 3, Wii, Wii U and Nintendo 3DS while gamers can also interact with their worlds using the accompanying Toy Box and augmented reality Action! apps for the iPad.