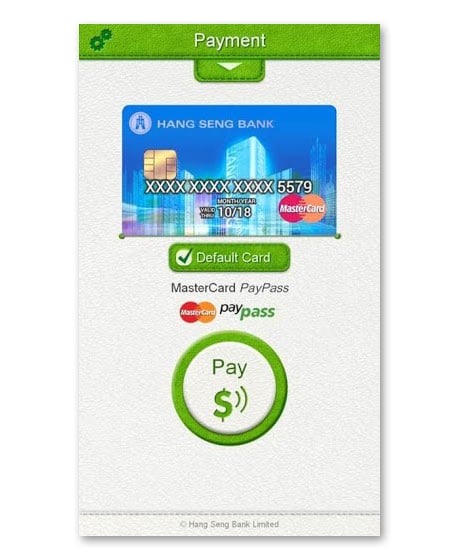 The service was first announced late last year and its currently available at around 1,000 outlets equipped with MasterCard PayPass terminals across Hong Kong; this number is expected to exceed 2,500 locations by the end of August 2013.

To use the service, Hang Seng MasterCard cardholders can visit any PCCW mobile store to exchange their existing SIM card for an NFC SIM card at no extra charge. Customers’ card details are stored on the SIM card.

The bank’s mobile wallet app can store multiple cards, according to the bank, and allows customers to make payments of up to HK$500 (US$64.48). Customers can opt to enter a password each time they make a payment using their mobile phone and can also check their 20 most recent transactions through the app.

“The service uses an open architecture design,” he explained. “This will support the long-term expansion and recognition of NFC mobile payment services in Hong Kong by allowing other interested parties to participate. We will also continue to explore new opportunities to further leverage this platform to provide greater convenience for customers.”

To promote the service, customers are being offered double Cash Dollars rewards on transactions made via NFC until the end of December 2013. Hang Seng will launch additional promotional offers by issuing e-coupons to customers, starting in August.

Bank of China (Hong Kong) is also in the final stages of testing an NFC service that uses a mixture of secure digital memory cards, SIM cards and NFC add-on devices. The service is due to launch in the second half of this year.