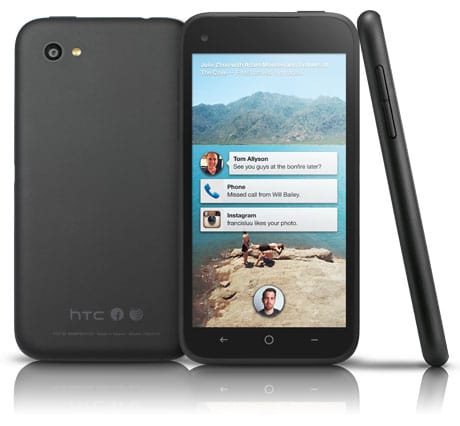 The HTC First is a mid-range touch screen smartphone that pushes Facebook integration to the front and centre — and includes NFC support.

The Android device features Facebook Home, a “mobile experience that puts your friends at the heart of your phone.”

Facebook Home is a family of deeply integrated apps that replaces an Android phone’s regular start screen with a stream of posts, photos and notifications from the user’s friends, all delivered via the social network.

That the social network could launch a phone of its own has been the subject of speculation for years, but Facebook has instead delivered an app which acts as a user experience layer on top of the Android operating system and will run on multiple devices.

“There’s no other phone, app or operating system like it,” says Facebook, neatly pointing out that Home goes far wider than a single phone model and sits somewhere between an app and an operating system — with the potential to effectively replace both.