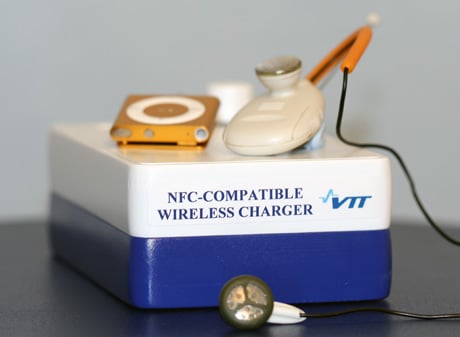 Combining the two technologies will make it possible to design increasingly compact and cost-effective wireless charging circuits to combat the increased power consumption of modern mobile devices, the researchers say.

NFC devices will also be able to receive electrical power wirelessly from other NFC devices acting as charging plates, they add, but further NFC standards work will need to be done to make this possible.

For example, “in future, small devices can be placed on a laptop PC that operates as a NFC-compatible charging plate,” says VTT. “In this way, using separate charging accessories and plugging in charging cables can be avoided.”

“The challenges include, among others, current NFC antenna circuits which have not been optimised for efficient wireless energy transfer.

“In addition to technological development, introducing NFC-based charging to commercial products requires amendments to the NFC standards so that they also support the design of open interfaces, both in the device to be charged and the wireless charger devices,” VTT explains. “This work is under way at the NFC Forum.”