A startup is using NFC tags, printed to look like cassette tapes, to provide a modern day version of a traditional mixtape, enabling musicians, DJs and fans to share their favourite music via a new kind of physical media.

Australian startup Sharetapes has launched an NFC tag-based service that is designed to bring back “a little of the magic” of sharing a mixtape with friends and fans. 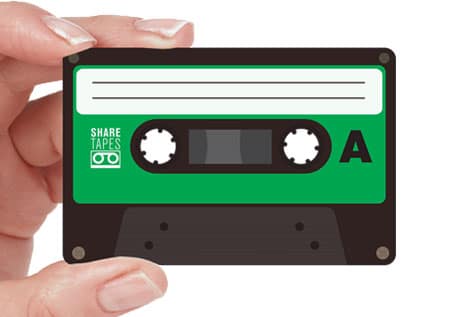 Sharetapes are NFC tags which are produced in a card format and printed to resemble a traditional cassette tape. Customers create a playlist on online services such as Spotify, Youtube or 8tracks — or use an existing playlist — and then link the list to a Sharetape via the company’s website. The Sharetapes can then be handed out at music events or given to friends and contacts so that anyone with an NFC phone can play the selected music on their device. A QR code on the reverse of the tape can also be used by those without an NFC phone.

“I have always loved mixtapes, growing up I had a cassette player in my room and a box of tapes my mum had given me,” explains CEO and co-founder Richard Dupe. “They were taped off the radio, mixes my uncle had made and random unlabelled compilations full of music from the last few decades.

“That was how I got introduced to music, artists that were long dead, some without the recognition they deserved, or sometimes new bands that hadn’t broken out yet,” he told NFC World.

“In a world where I can pull a phone out of my pocket and listen to basically every song ever recorded it kind of kills the fun a bit. I find myself listening to a lot of stuff I have already heard. With Sharetapes we think it would be cool to try and bring back a little of the magic.”

“We have had a lot of interest from artists and DJs to promote their music,” says Dupe. “Sharetapes gives them something to hand out at gigs, or hand to a producer they might be lucky enough to meet or even to sell digital downloads that still get to have cover artwork. We have also had a lot of interest from brands and marketing agencies wishing to distribute digital media to consumers in a fun and technologically relevant way.”

Sharetapes are available in packs of five for A$6.99 (US$7.15) plus shipping. Volume discounts and custom printing options are also available.