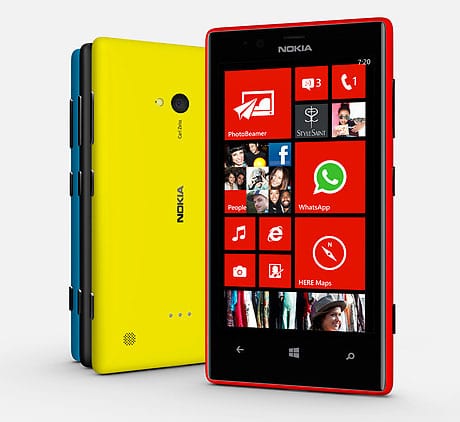 Nokia has unveiled the Nokia Lumia 720 at Mobile World Congress 2013.

The Windows Phone 8 device is designed to be an affordable smartphone, “with an estimated starting price of €249 before taxes and subsidies.” It features a slimline unibody design, colourful cover options, a 4.3-inch 800 by 480 display and Snapdragon S4 processor as well as NFC.

A “super sensitive” touch screen works even with gloves or long fingernails, Nokia says. Wireless charging is also available via an optional shell for the device.

“This sleek and stylish Windows Phone 8 smartphone is sure to appeal to a young and design-savvy crowd with busy social lives,” the Nokia Conversations blog explains. “It has the best camera experience of any midrange smartphone, has a slim profile, great battery life, and weighing just 128 grams, it’s the perfect accessory for a night out with friends.”

The Nokia Lumia 520, a budget WP8 device announced at the same time, does not have NFC.

“By offering better experiences at a more affordable price we are reinventing the battle for affordable mobile devices, and Nokia has the building blocks to win,” says Stephen Elop, president and chief executive officer of Nokia.

Rollout of the Nokia Lumia 720 is planned to start in Hong Kong, Vietnam and Singapore in Q1 2013, before continuing into markets including China, Europe, Asia, Africa and India in Q2.

A video produced by Nokia shows off the new device: