The new smart appliances all use LG’s Smart Control technology, which now includes NFC, allowing users to pair their smartphones with their white goods via an NFC Tag-on touch point on the appliance. They can then subsequently manage the machines remotely over a WiFi connection. 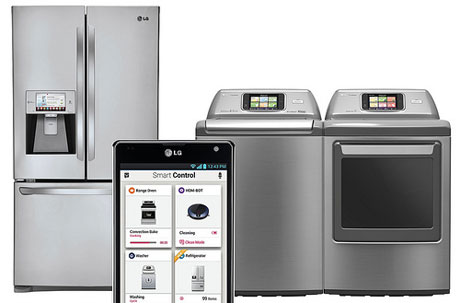 LG’s upgraded smart technology gives users the ability to “control their appliances no matter where they are,” says Seong-jin Jo, president and CEO of the LG Electronics Home Appliance Company. “They can start a load of laundry while driving home from work, tell their robotic cleaner to vacuum the floor before company arrives or view the refrigerator’s inventory of food items.”

NFC is used for pairing and to hand over to a optional WiFi connection, so that data may be exchanged between the phone and the appliance over a greater distance. Users can also program actions on their phone and then transfer the commands to the appliance via NFC.

The technology is also used in a Smart Diagnosis feature that alerts the user to technical issues with an appliance.

The company has also introduced a pocket-sized portable photo printer that uses NFC to pair with a camera. The LG Pocket Photo can be used with Android phones and uses Zink “zero ink” photo paper to print 2-inch by 3-inch snaps on demand. The device retails in South Korea at around £105/US$170.