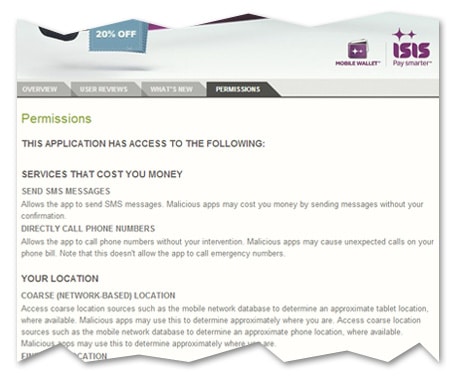 T-Mobile’s Isis app for Android phone users can now be downloaded from Google Play, ahead of the NFC venture’s launch in Austin, Texas and Salt Lake City.

The app’s page on Google Play provides a number of screen shots of the app in use, as well as a long list of permissions that users of T-Mobile’s Isis service will need to provide. Permissions needed include:

Details of an update that will bring Isis mobile wallet capabilities to users of the HTC Droid Incredible 4G LTE on Verizon have also been picked up by Droid Life. TmoNews, meanwhile, has obtained a document that appears to confirm that the service will launch as expected on 22 October with support for Samsung Galaxy devices on T-Mobile.