Full video coverage of the launch of Windows Phone 8, during which Microsoft unveiled support for both NFC and a mobile wallet in the new version of its mobile operating system, is now available to view on Microsoft’s Channel 9 website. 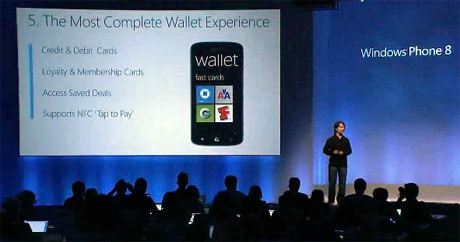 NFC is first introduced during the presentation by Joe Belfiore, Microsoft’s corporate vice president of Windows Phone, at 19:28 into the video. Belfiore explains that Windows Phone 8 will come with support for native NFC and that this support isn’t limited to phones but will also cover interactions between phones, laptops and PCs. Microsoft announced in September 2011 that Windows 8 includes support for NFC.

He then says that “Windows Phone 8 will include what we think will be the most complete mobile wallet experience on any mobile phone” when it ships this fall and explains how he believes Microsoft’s mobile wallet will improve on Google Wallet:

“We’ve seen Google with their wallet enable secure NFC payments by putting the secure element in the device and an unfortunate side effect for that has been that some mobile operators have chosen to remove the Google Wallet because the mobile operators themselves want to provision those secure elements and enable their customers to maintain their secure payment instruments as they move from one phone to the next.

Belfiore then shows a video from Orange, Microsoft’s lead mobile operator partner for the new mobile wallet, and explains that “we’ve been partnering deeply with Orange to make sure we have the right technology and the right service infrastructure to deliver an experience that will be delightful for end users.”

“Every windows phone will include the wallet hub and whether your mobile operator has secure SIMs available or not, you still get all the benefit of third party apps and services integrating with the wallet,” Belfiore then adds. “Orange will be the first to market with secure SIMs at launch on the Orange network and we’re working with a number of other operators as well.”

“We’ve been working together closely with Isis,” he explains. “We’re making good progress technically and we expect to have a solution on Isis sometime next year, but not at launch.”

Belfiore then returns to NFC at 48:07 in the video to demonstrate how the technology can be used to “tap and send” data from a Windows phone in peer-to-peer mode to another NFC-enabled Windows device.

He then shows the wallet user interface and uses credit and debit cards issued by Chase as an example. “What we are showing is an early sample of that Chase app under development,” Belfiore explains. “We are working with Chase to bring their great range of customer benefits like Quickpay, like scanning cheques and being able to deposit them as part of a native Windows Phone app that will be available later this year.”

Belfiore then goes on to explain the Windows Phone 8 mobile wallet’s deals capability in more detail, using the search for a good place to sit down and read a book borrowed from a library service as an example.

From within a San Francisco library app, which also includes a virtual version of a barcode-based library card, users will be able to directly access a mapping service that displays local services and a list of deals available from local merchants. They can then click on a particular merchant’s deal to view their “Place Card” and then click on an offer to collect the deal and save it to their wallet, share it with other people or pin the deal to their start menu. Saved deals can then be redeemed at the merchant via NFC, barcode scanning or other means.

The wallet can be secured by the user via a PIN and, as well as real world purchases, the new mobile wallet can also be used for mcommerce, app store and in-app purchasing, Belfiore adds. Here, items can be charged to the user’s choice of payment mechanism.

Finally, at 01:03:00 in the presentation, a video shows how the various functions within the wallet can be combined in scenario featuring a family going out to lunch at a cafe. The family first purchases a Groupon deal for a cafe on their phone, using the in-app purchasing platform — whilst standing outside the cafe.

On entry, their phone is tapped to the cafe’s NFC-enabled Windows 8 tablet to share contact information. They are then able to place their order from a comfortable seating area using the cafe’s mobile menu and settle their bill at the end by tapping their NFC phone to the cafe’s NFC tablet to redeem their Groupon coupon.