A new version of Shazam, the media discovery app used by 180m people around the world, will allow Android phone users to share music, TV ads, tour dates, coupons and more via NFC.

Media discovery specialist Shazam has announced a new NFC version of its Android app that includes support for sharing content via Android Beam.

“People who use Shazam on the new Android platform will simply be able to hold their devices back-to-back with that of their friends to share their favourite music, merchant offers and television tags – giving their friends access to music samples, coupons from advertisers, tour dates and other great information,” says Shazam. “If your friend doesn’t have the Shazam app, they are introduced to Android Market to get it.”

The new version of the Shazam app also includes enhancements to improve recognition speed. “With the new release, songs, television adverts and other content can be identified in a fraction of the time it previously took — in as little as one second, making it even faster for people to discover their favorite songs and unlock content in television shows and ads,” the company explains.

“We are committed to continually enhance the performance of Shazam to ensure we deliver the best experience when people use the Shazam app,” says the company’s Alex Musil. “We believe that near instant identification creates the most efficient way possible to discover, purchase and share the music, television content and brand offers that our loyal users love.”

The new functionality is scheduled to be live in the Shazam app as part of a major update due to be released “within the coming weeks”. 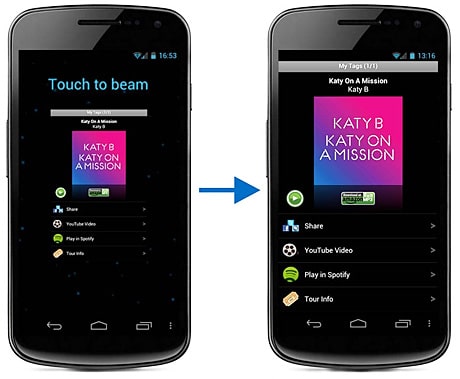