Barclaycard has reworked its rollercoaster ride TV advertisement to promote the NFC payments system it launched last month with Orange. 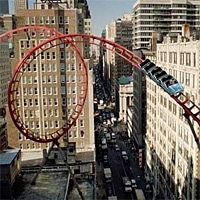 The main character, whose morning commute sees him speeding between skyscrapers and through the city on a rollercoaster, pays for his breakfast at a kiosk with a Samsung Tocco Quick Tap phone rather than the contactless Barclaycard that appeared in the original ad.

Last month Orange and Barclaycard launched Quick Tap, the UK’s first commercial NFC service, allowing customers to make payments of up to £15 (US$24) with an NFC phone at any of 50,000 points-of-sale in the UK currently equipped with contactless point-of-sale terminals.