Buyers of the Nokia Astound smartphone, a T-Mobile USA version of the Nokia C7 that has been unveiled this week at the CTIA Wireless show, will be able to access the phone’s in-built NFC capabilities from day one, Nokia has told NFC World. 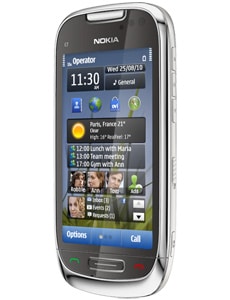 Exactly what users will be able to do with the phone’s NFC functions, however, is not yet clear and there is no news yet on when NFC functionality will be switched on for Nokia C7s purchased in other countries.

“The Nokia Astound includes an NFC chip and the device software supports its functionality,” says Nokia. “The Astound will ship with NFC turned off, but a user can enable it by entering the device settings and turning it on.”

Nokia first began shipping the C7 in October last year but buyers are still waiting for a software upgrade to be released before they are able to begin using the phone’s NFC functions. In November, Nokia’s head of PR for France said that NFC tag reading and pairing functions would be switched on from the beginning of 2011.

Nokia told NFC World today, however, only that “in the future we are planning to release a software update for Nokia C7 that will activate the NFC chip, but we have not set a date to that update yet.”

The phones do not include an embedded secure element, which could be used by Nokia to offer its own NFC services. Rather, the C7/Astound only provides support for an NFC SIM — so all secure NFC services offered to users would need to be provided via their mobile network operator.

The Symbian-based Astound is pitched as an entry-level smartphone and will retail at US$80 with a contract when it ships on 6 April.

T-Mobile USA, which is due to be acquired by AT&T, is a partner with AT&T Mobility and Verizon Wireless in the Isis joint venture, which plans to introduce NFC services in the United States from 2012. NFC World asked T-Mobile today if the operator has plans to offer NFC services to buyers of the Nokia Astound in the near future but we are yet to receive a response.