Taztag’s new TazPad is the first Android tablet to feature NFC connectivity, along with the company’s trademark array of other wireless connection technologies and a biometric authentication option.

French NFC specialist TazTag is to unveil an NFC-enabled Android tablet at Cebit 2011 in Hannover, Germany this week.

The TazPad comes with a 7-inch color screen with multitouch as well as full HD output via HDMI. The device connects via WiFi, Bluetooth, NFC and ZigBee and has a camera, GPS, an accelerometer and a biometric authentication option.

The tablet is aimed at the B2B market and TazTag sees particular potential for the device in the retail sector.

“After biometric authentication on the TazPad, a vendor may provide specific information on products, read his client’s loyalty card ([from a] card or NFC phone), book orders on site and even register a secure payment,” says the company.

“The TazPad without the biometric option can also be used at aisle end displays or store windows to inform a customer about a product presented to the tablet, to compare products, or to retrieve a promotional coupon using their NFC phone,” TazTag explains. 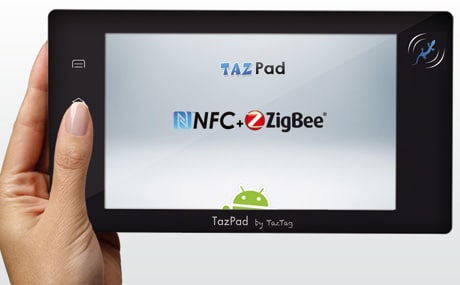 The TazPad is due to be commercially available during the second quarter of 2011 and will be on show at Cebit this week on TazTag’s stand in the UBIFrance Pavilion located at Hall 9 Stand B09.