Samsung has announced a second mobile phone equipped with near field communication functionality at the Mobile World Congress in Barcelona. 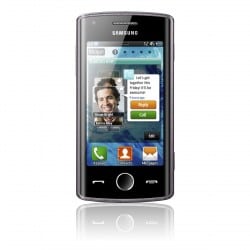 The Samsung Wave 578 runs on the handset maker’s own Bada smartphone platform, for which the company announced NFC support in January, and features a 3.2-inch screen and 3.2 megapixel camera. Like the Samsung Galaxy S II announced yesterday, however, more than one version of the phone will be produced and availability of NFC functionality will depend on “market situation”.

“With the Samsung Wave 578 handset, we will provide the latest innovation in mobile industry running on bada platform,” says JK Shin, head of Samsung’s Mobile Communications Business. “The enhanced connectivity, design and social experiences enabled by this handset represent Samsung’s commitment to democratizing the smart phone market and providing users around the world with access to rich experiences and content.”

The first Bada mobile phone, the Samsung Wave S8500, was launched in June 2010. Five million phones running Bada have been produced to date and Samsung expects to ship ten million Bada devices by the end of the first half of 2011.

The Samsung Wave 578 will be available in May of 2011 in France and will then be gradually rolled out to European countries, CIS, South East Asia, India, Middle East, and China. The phone is on show on Samsung’s stand in Hall 8 at the Mobile World Congress this week.

• NFC World’s Mike Clark will be at the Mobile World Congress all this week. If you are launching a new NFC product at the show or would like to see a copy of our NFC Business Models report, please send Mike an email.﻿