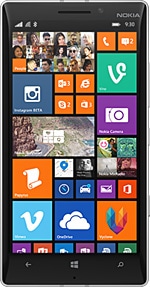 The Nokia Lumia 930 is a svelte Windows Phone handset with NFC.