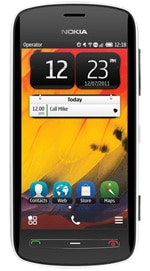 The Nokia 808 Pureview is a camera enthusiast’s phone, with a 41 megapixel snapper mounted in a hump on the rear. The Symbian Belle handset with an otherwise pedestrian specification also boasts support for secure NFC.

The existence of a successor to the much-admired Nokia N8 with a strong camera offering was first hinted at in mid-December 2011, when it was referred to as the Nokia 803 and the RM-807.

The 808 PureView was announced on 27 February 2012 at the Mobile World Congress and reached retail in the second quarter at around €450 (US$600). The device is listed on Nokia’s developer site as being destined for all markets except North America, though the phone maker has subsequently decided to offer the 808 in the US as well.