23.4 million US consumers aged 14 and over will use Starbucks’ mobile app to make a purchase at the point of sale at least once every six months this year, research from eMarketer has found. Apple Pay will be used by 22 million people, Google Pay by 11.1 million and Samsung Pay by 9.9 million people.

“The ranking will remain unchanged through 2022,” eMarketer says, but competition is intensifying. 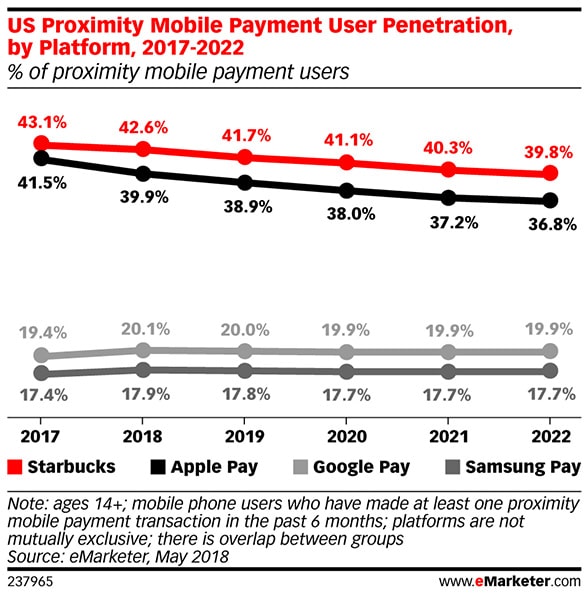 “While each of the top four apps will continue to gain users in the US throughout the forecast period, their share of mobile payment users will continue to drop. That can mainly be attributed to new payment apps entering the market, particularly merchant-branded mobile apps.”

“Retailers are increasingly creating their own payment apps, which allow them to capture valuable data about their users. They can also build in rewards and perks to boost customer loyalty,” says eMarketer forecasting analyst Cindy Liu.

Apple Pay is currently accepted at more than half of US merchants, eMarketer found. “Google Pay is not as widely accepted, but it benefits from being preinstalled on Android phones. While Samsung Pay has the lowest adoption in terms of users, it is the most widely accepted by merchants.”

The Starbucks app has gained traction “thanks to its ability to tie payments to its loyalty rewards program, ” Liu says. “For users of the app, the value of paying with their smartphone is clear and simple — you can save time and money at the register, all while racking up rewards and special offers.” 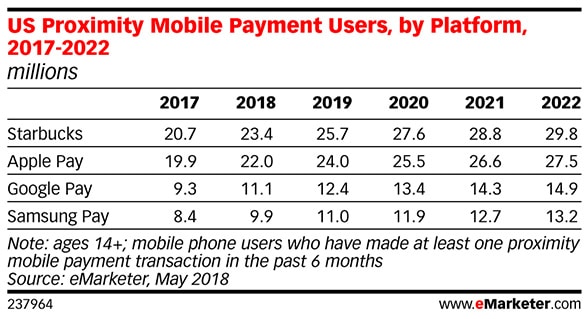