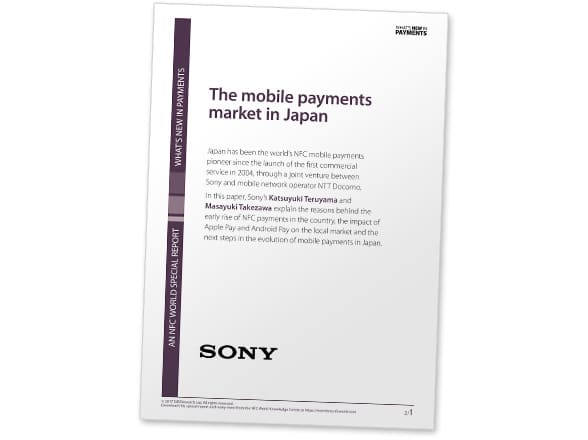 NFC mobile payments have been a reality in Japan since 2004 when Sony and mobile network operator NTT Docomo formed a joint venture to bring the technology to market. In this new paper Sony’s Katsuyuki Teruyama and Masayuki Takezawa explain the reasons behind the early rise of NFC payments in Japan, the impact of Apple Pay and Android Pay on the local market and the next steps in the evolution of mobile payments in the country.

“The Mobile Payments Market in Japan” begins by explaining the rise of contactless prepaid cards in Japan, where they are used for both transportation ticketing and for purchases in retail stores.

It then explains how the prepaid card issuers quickly made their move onto mobile phones — and how growth in mobile payments was stalled by the popularity of the iPhone which, unlike locally produced mobiles, only began to support NFC mobile payments in Japan in 2016.

The authors then explain the unique features of Apple Pay in Japan, which enable iPhone users to make payments with existing prepaid card services, and how Android Pay has been implemented locally to also take advantage of the country’s established contactless payments infrastructure.

The article then concludes with a look to the future of mobile payments in Japan as plans are put in place to incorporate international standards to promote “an environment where users easily can make payments anywhere in the world.”

The full eight-page paper, written exclusively for NFC World, is available for readers to download free of charge from the NFC World Knowledge Centre.

• This article is part of What’s New in Payments, our special report series which explores and explains the latest payment trends and technologies. You can download the entire series here.