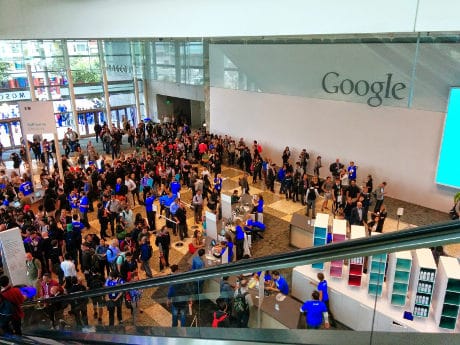 The new BLE Peripheral Mode support in Android L, version 5.0 of the operating system, means that “Android devices can now function in Bluetooth Low Energy peripheral mode,” Google says. “Apps can use this capability to broadcast their presence to nearby devices — for example, you can now build apps that let a device function as a pedometer or health monitor and transmit data to another BLE device.”

Currently, Android devices can only consume Bluetooth LE data but the addition of peripheral mode support means they will be able to ‘advertise’ too, opening the way for these devices to act as Bluetooth beacons.

The lockscreen update brings personal locking to Android devices. The feature makes use of a variety of signals to maintain user security without the need to physically unlock a device by entering a password or using an alternative security mechanism. Signals used include the location of the user, differentiating safe locations like home and office from other locations, as well as the proximity of a connected Android Wear device. If a user is wearing their Android smartwatch, for instance, they will not be required to enter a PIN.

The notifications upgrade improves the way in which alerts are displayed on the user’s device and also provides a way for them to be managed and prioritized so that the most important rise to the top. Users can swipe down on a notification to expand it and act upon it — from the lockscreen or while using an app. Developers can also differentiate their notifications using accent colours and other design features as well as making use of Material Design, a feature that enables developers to add an illusion of visual depth to their apps.

For developers, Google says, the new lockscreen notifications “let you surface content, updates, and actions to users at a glance, without unlocking. Visibility controls let you manage the types of information shown on the lockscreen. Heads-up notifications display content and actions in a small floating window that’s managed by the system, no matter which app is in the foreground. Notifications are material themed and you can express your brand through accent colours and more.”

Android Wear apps can also leverage the computing power and connectivity of the user’s Android phone so that, for example, a Google search request made to a smartwatch will actually be performed by the user’s phone. The results are then returned to the smartwatch. Voice input is also now supported, enabling users to say “OK Google” and then speak their instruction.

Android Wear can also leverage Google Now to bring up contextual information — such as restaurant reservations and boarding passes — on a connected device throughout the day. Users also do not have to separately download an Android Wear app to their device. An app on their phone with an Android Wear extension will automatically also be available on the user’s wearable device.

David Singleton, director of engineering for Android, demonstrated a wearable app for Eat 24 during the presentation.

“Eat 24 is an app that makes food ordering both fun and easy,” he explained. “When it comes to take out, I’m a creature of habit and Eat 24 has recognised this and takes advantage of that contextual screen.

“Around the same time I made an order last week, it posts a notification suggesting I order again. I can tap on the notification, and launch into their full screen UI. Here I’m presented with a beautiful interface that lets me confirm the kind of food I’d like today, and then I can quickly swipe to see and repeat my last order. Just one more tap to pay and the pizza is on its way.

“Now you might be wondering how this app got to my watch. Well, all I had to do was install the Eat 24 app from the Play Store on my phone. When a watch is connected, the wearable portion of the app is automatically installed and kept up-to-date on that watch.”

PayPal also has revealed that it has an Android Wear app in beta testing that allows device owners to check in to pay at local stores, redeem offers and receive payment notifications while on the go.

“Most people check their phones more than 150 times a day,” Sundar Pichai, SVP for Android, Chrome and Apps, says. “Often, it is to read a text, look at a notification, or get some other simple piece of information. That’s a lot of time spent unlocking, swiping and entering passwords, when your hands could easily be free handling more important things.”

With Android Wear, “you get the information you need, quickly, at a glance — just like you’re used to doing with your watch. Just say ‘OK Google’ to ask questions or to get stuff done. Get alerted when it’s time to leave for dinner. Call a cab to take you there. See the traffic on the way. Text a friend once you’re seated. It’s all right there, on your wrist, easy to see, right when you want it”.

A new Google Fit health program, meanwhile, will enable developers to sync data collected by health and wellness trackers with their Android devices.

The first two Android Wear devices — the LG G Watch and the Samsung Gear Live — are available from the Google Play store today, while Motorola’s Moto 360 will be available “later this summer”.

Version 5.0 of Google Play Services also brings new features for payments and commerce providers. Developers can include a “Save to Wallet” button in their apps to enable customers to store offers in their Google Wallet account. Apps can also make use of geofencing to prompt customers to show a digital card when in a store and a split tender option lets users pay for part of a purchase with their Google Wallet balance and the rest by credit or debit card.

“‘Save card to Google’ allows you to store loyalty cards, but not only loyalty cards, also coupons and discounts and bonuses,” Google’s Magnus Hyttsten explained during a Google Play services Rocks! session.

“If we tie that together with context and location, for example, if I’m walking into a store, then that store can offer me things based on what my loyalty program is, my status is and, also, it can utilize the coupons that I’ve collected.”

Customers can also scan a credit or debit card using their phone’s camera to have their payment data automatically entered for a transaction, removing the need to type in their card details. A new address API also lets an app access a user’s pre-stored address and use it to complete their delivery details while Wallet Fragments makes it easier for merchants to include a ‘Buy with Google’ button in their store. Improvements for in-app purchase ads have also been made.

“Users who have set up direct carrier billing on their smartphone can also make purchases on Google Play from their tablet, charging to the same mobile phone bill,” Google also announced.

Google also announced Android Auto and Android TV, bringing two new environments for Android apps into the ecosystem. Native Android apps can now also run on Chromebook, Google said, while a new Android for Work program will enable users to run both corporate and personal apps on the same device — while keeping personal data isolated from work data. A new Android One program was also introduced that will enable manufacturers to build low-cost Android phones for developing markets.

“Many of us want to stay connected even while driving. Getting directions, traffic updates, finding just the right music playlist. But using our phones while at the wheel is simply unsafe,” Pichai explains.

“Just connect your Android phone to a car with Android Auto, and you’ll have what you need at your fingertips such as turn-by-turn navigation from Google Maps, your curated playlists and radio stations through Play Music, simple-to-use voice search, and reminders from Google Now. This is accessible through your car’s controls and, more importantly, is far safer than fumbling around with your phone.”

“Android TV brings all that you love about Android apps and games to your living room,” he added. “Android is baked directly into your TV-watching experience, through a set-top box or as part of your TV. You can use voice search to find a live TV show, a good flick from Google Play, or a music video on YouTube. Plus, because it’s Android, you’ll be able to play your favorite Android games, reimagined for TV and with a gamepad. Android TV, which, like Chromecast, supports Google Cast technology, will ship with products from a range of consumer electronics companies later this year.”

A video of the full keynote presentation shows off many of the new announcements in detail: