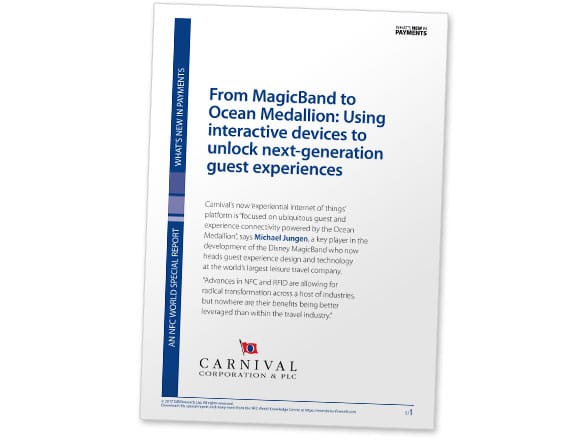 The world’s largest leisure travel company is introducing a new cruise ship experience that uses a small, in-house designed device incorporating both NFC and Bluetooth Low Energy to act as a guest’s key to a wide range of personalized, next generation services.

Michael Jungen, a key player in the development of the Disney MagicBand and who now heads Carnival Corporation’s guest experience design and technology initiatives, explains how the Ocean Medallion was conceived and built in an in-depth paper which is now available to download from the NFC World Knowledge Centre.

“Over the past two and a half years, our teams have been hard at work around the globe developing the Ocean Medallion — a first-of-its-kind ‘experience platform’ that leverages a one-of-a-kind wearable embedded with NFC (near field communication), BLE (Bluetooth Low Energy) and other telemetry-producing sensors — in the context of a smart ship with an orchestrated, multi-sensor experience ecosystem,” Jungen explains.

“This November, Medallion Class ships will make their debut as the Regal Princess from Princess Cruises launches as a truly smart ship. The guest experience and a ‘humanized’ IoT will be an order of magnitude beyond what we’ve seen before as consumers.”

Jungen begins his paper by looking back at the development of the Disney MagicBand, the technology behind it and the reasons why Disney was willing to invest in such a major undertaking.

“From MagicBand to Ocean Medallion: Using Interactive Devices to Unlock Next-Generation Guest Experiences” provides detailed insight into the technology employed in the Ocean Medallion and the challenges his team faced in developing it. The paper goes on to detail the Ocean Compass digital experience portal that serves as a guest’s personal concierge before, during and after their vacation, and explains the concept behind Carnival’s xIoT (experiential internet of things) ecosystem — a network of more than 7,000 sensors and readers located across each smart ship.

“Advances in NFC and RFID are allowing for radical transformation across a host of industries, but nowhere are their benefits being better leveraged than within the travel industry,” Jungen says.

“Because its ecosystem is completely contained and singularly controlled — it generates its own electricity; controls its own commerce system; has its own telecommunications and navigation networks; runs its own retail, entertainment, recreation and dining operations; operates casinos; and houses thousands of people at a time (more in fact than some small cities) — a cruise ship is an ideal setting for IoT.”

Jungen’s full twelve-page paper is available for readers to download free of charge from the NFC World Knowledge Centre.

• This paper is part of What’s New in Payments, our special report which explores and explains the latest payment trends and technologies. You can download the entire series here.