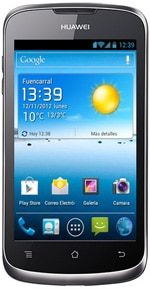 The Huawei Ascend G300 is an Android 2.3 smartphone that is available in NFC and non-NFC versions.

The G300 was launched at the Mobile World Congress in 2012 and started shipping soon afterwards, reaching the UK in April that year.

Thanks to francman for the tip-off.