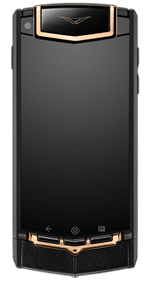 The Vertu Ti is a hand crafted luxury Android 4 smartphone with NFC that comes with a sapphire crystal screen and leather, alligator skin or red gold accents.

“Based around a titanium case that has been used for its strength, elegance and low weight, Vertu Ti also uses leather accents as well as the largest sapphire crystal screen ever engineered at 3.7 inches,” the company says.

The phone comes with Vertu Key, a button that connects the caller to a concierge service and “provides instant access to a curated world of benefits and services available via a global team of professionals available to customers wherever they may be, 24 hours a day, seven days a week.”

Vertu was a division of Nokia until 2012 and previously specialised in high-priced Symbian handsets, reports the BBC, while The Telegraph is impressed by the handset, declaring that “finally, with the Ti, Vertu is a truly credible luxury brand.”

The Vertu Ti was announced in February 2013 and supports SIM-based NFC.