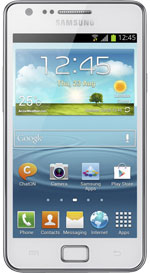 The Samsung Galaxy S II Plus is an updated version of the groundbreaking Galaxy S II smartphone that is, like its predecessor, available in NFC and non-NFC versions.