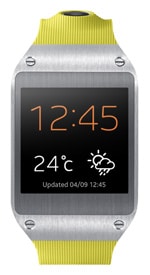 The Samsung Galaxy Gear is a smart watch which was widely expected to come with NFC, but no mention of the technology was made at the 4 September 2013 launch of the device.

Before the launch it was believed the device would include a camera, speakers, a 320 by 320 Oled display, and “built-in NFC to allow for bump-to-sync and authenticate.”