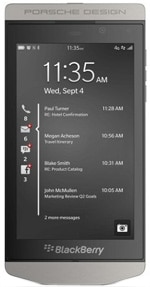 The Porsche Design P’9982 is a luxury re-imagining of BlackBerry’s Z10 NFC handset that retails at US$2,350.

Porsche Design has given the smartphone a sleek stainless steel shell and a leather rear cover. Inside, the handset is the same as the Z10 but offers 64GB of internal storage instead of 16GB and can handle larger 64GB microSD cards.

The device was announced in November 2013 and appeared at retail on the 21st at a launch in top London department store Harrods.