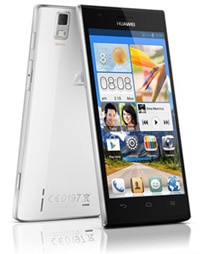 The Ascend P2 was announced on 24 February 2013 in Barcelona, just ahead of the Mobile World Congress.