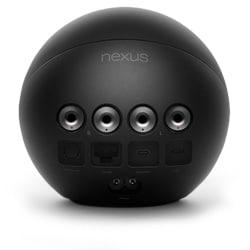 The Google Nexus Q is a media player that runs Android 4.0 and is controlled via an Android phone or tablet.

The Nexus Q, described by the search giant as “the first-ever social streaming device”, was launched at the end of July 2012 at Google’s I/O developer conference.

The device runs Android 4.0 and includes a 25 watt amplifier as well as NFC, Wifi and Bluetooth connectivity. It is designed to be plugged into hi-fi speakers and a TV in the home and connect to multiple Android phones and tablets, which act as remote controls and content sources for the player.

A teardown of the device conducted by iFixit reveals it contains an NXP PN544 NFC controller.

On 31 July Google emailed pre-order customers to let them know that the consumer launch of the Nexus Q is to be postponed “while we work on making it even better.”