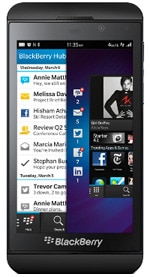 At the launch BlackBerry CEO Thorsten Heins hinted that connectivity and the internet of things will be core to the company’s proposition: “We will soon give you more ways to connect your mobile experience to not just other people, but the whole world around you,” Heins teased. “We will be a leader in connecting you to your internet of things.”

The Z10 contains an NFC controller from Inside Secure with an integrated secure element, offering the possibility of BlackBerry branded secure NFC services in the future.

A keyboard-equipped version of the phone, known as the BlackBerry Q10, was also announced and is expected to be available from April 2013.

The BlackBerry Z10 was widely referred to as the L-series ‘London’ before its launch.