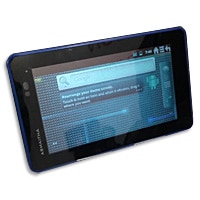 Announced in May 2012 by Indian manufacturer Asmaitha, the Sruta tablet will feature a 7-inch display, an ST Ericsson Nova 1GHz processor, and NFC. The device will run Android 2.3, with an upgrade to Android 4.0 promised by the end of the year.