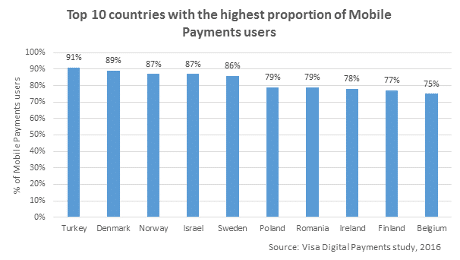 Some 54% of European consumers are using a mobile device to make payments for a range of activities in-store, in-app and online, compared to 18% at this time last year, Visa’s 2016 Digital Payments Study has revealed.

Only 12% of respondents have never used these methods of purchasing and have no plans to do so, a drop from 38% in 2015.

The study, based on the responses of more than 36,000 people in 19 European countries, also reveals that more than half of those surveyed (58%) have used contactless cards this year, up from 20% in 2015.

Contactless card carriers are more interested in using a mobile device as a payment method in-store compared to non-contactless users (52% vs 32%). They are also keener to shop via a retailer’s own app (49% vs 31%) and using their mobile to pay for a meal (50% vs 30%).

In the UK, 74% of those surveyed make mobile purchases, with more than half using their device to transfer money to friends and family (59%) and just under half paying for takeaway meals (45%). 43% buy high value items such as holidays and electronics on a mobile device, 42% make regular transactions such as paying household bills and 41% acquire bus or train tickets.

The research also shows that mobile banking activity is increasing across all age groups, with more than half of European respondents in all age brackets using the facility. A growth rate of 33% means the highest uptake is in the 55-64 year old bracket, while it’s 24% for millennials aged 18-34.

“The near-ubiquity of contactless card usage is gradually helping everyone engage with newer ways to pay, including mobile banking,” says Kevin Jenkins, UK & Ireland managing director at Visa. “This data is a confirmation that the future of digital payments has arrived, with consumers across the length and breadth of the UK and Europe embracing a variety of new ways to pay.

“Visa sees smartphones and wearables as the beginning of a broader trend, with millions of new connected devices making it simple, safe and secure to integrate daily commerce transactions into almost any technology.”