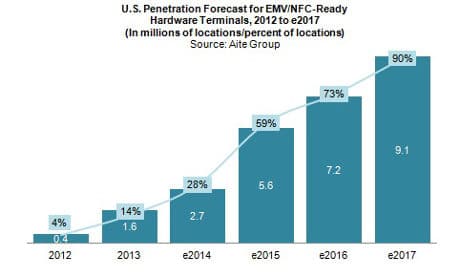 About 59% of US point-of-sale (POS) terminals will be EMV-enabled by the end of this year, research by Aite Group has revealed, with NFC distribution projected to “ramp at the same rate as EMV distribution,” senior analyst Thad Peterson tells NFC World.

“We don’t have specific data on NFC-capable terminals, but based on my interviews with POS providers, acquirers, processors and ISOs, virtually every EMV terminal that has shipped since 2014 is NFC capable,” he said. “My conclusion is that NFC distribution will ramp at the same rate as EMV distribution.”

The findings, part of Aite Group’s ‘EMVelocity: Outlook for POS Re-terminalization and Mobile Payments’ report, also reveal that awareness of the migration to EMV among small to mid-size US retailers has increased, with two-thirds of merchants now aware of the standard and 61% having either begun or already completed implementation.

“It’s good news that the pace of implementation has picked up but when the liability shift occurs, nearly half of all merchants will now be vulnerable to counterfeit card fraud and the liability will be on them,” says Peterson.

“Every organisation in the payments space needs to increase its efforts to educate and inform the merchant community about the importance of moving to EMV chips and the value of implementing NFC.”