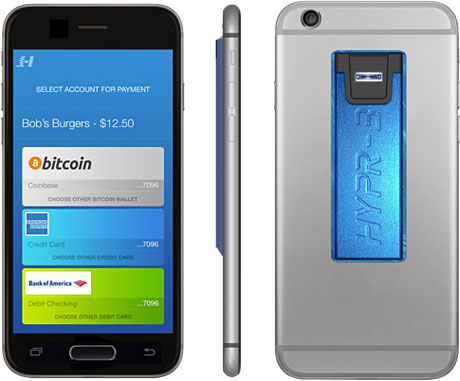 A US startup is taking pre-orders for a biometrically secured mobile wallet, consisting of a payment app and Bluetooth Low Energy (BLE)-based “bio-sticker” attached to the back of the user’s phone. The system, shown at CES 2015 in Las Vegas this week, can be used to make payments with Bitcoin, credit and debit cards.

HyprKey’s Hypr-3 bio-sticker includes a fingerprint scanner, a BLE radio to communicate with the host handset and NFC. The 3.2mm thick device can work with any existing app that has been integrated with the company’s authentication API.

Consumers will be able to scan a credit card to add it to the Hypr-3 app before making a payment using NFC at any contactless-enabled terminal. The card number is biometrically secured and tokenized, and the payment is processed in the cloud, says the company.

“A user’s fingerprint never leaves the sticker and is used to encrypt the credit card information,” HyprKey explains. “The sticker is easily attached and removed and can secure multiple devices. Users may attach it to their mobile phone or phone case, or simply wear it as a keychain.”

The platform will also let users spend and receive Bitcoin using either NFC or QR code, to conduct a payment using the digital currency. According to HyprKey, the platform does not require merchant-side integration and will work with any NFC-enabled terminal or Bitcoin public address.

“Users need not own Bitcoin in order to spend Bitcoin,” the company adds, explaining that a debit-to-Bitcoin conversion gateway set for launch in June 2015 will enable consumers to link their debit card and spend Bitcoin using real-time conversion.

“HyprKey’s software engineers also designed Hypr-3 to be extremely versatile so users won’t have to wonder how many payment methods and merchants his or her digital wallet supports. As time goes on, company developers will add further support and integrate many more payment platforms.”

“Biometrically securing credit cards is cool, but that was the easy part,” says George Avetisov, HyprKey’s CEO. “We’re aiming to provide the biometric tokenization protocol to secure all digital currencies and third-party wallets. Consumers should be able to access irreversible digital currency without having to worry about fraud and we believe the Hypr-3 logic is the appropriate method of doing so.”

“Anyone can pre-order Hypr-3 for only $20 right now on the company website and be part of the first batch of delivered units,” adds Avetisov. “There is no staggered rollout, no developer kit or other form of closed run.”

The Hypr-3 bio-stickers offer a one-year battery life and will start shipping in June 2015.