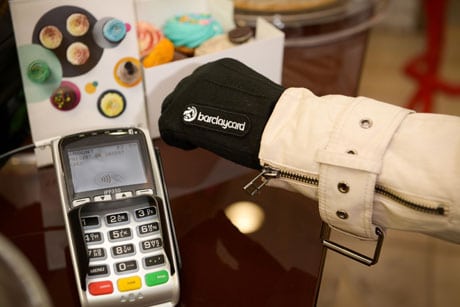 Barclaycard has begun ‘testing’ woollen gloves that can be used to make payments at any of the 300,000 contactless POS terminals in the UK with a touch of a hand.

The decision to test the contactless gloves follows a survey which found that “gloves you could pay with” was voted by consumers as the most popular wearable item they would like to see created. Rings came second followed by bracelets, handbags and hats in equal fourth place and scarves in fifth.

“The cosy woollen gloves, which are also touchscreen-enabled so shoppers can use their mobile phones while on the move, act like your credit or debit card and can be used to make quick and easy contactless payments,” the company explains.

“The Barclaycard gloves are embedded with a bPay contactless chip that can be linked to a credit or debit card and used to pay for transactions of up to £20. In the same way consumers use a contactless card, the gloves work when tapped on a contactless terminal and payment is processed in an instant.”

“At some point, most of us have experienced the stress of holding bags full of shopping while trying to find a spare hand to get our card out of our purse or wallet to pay,” says Mike Saunders, managing director of digital consumer payments at Barclaycard. “So when people told us that being able to pay with gloves would take some of the stress out of their Christmas shopping, we wanted to respond positively to shoppers’ demand.

“The pay gloves we’re trialling are designed to let shoppers tap, pay and go, even when their hands are full of shopping. If the prototype is popular, these handy winter warmers could be bringing some festive cheer to bag-laden shoppers by Christmas 2015.”

Barclaycard announced in June that it will make contactless payment wristbands available to anyone with a UK bank account or credit card next year.