UPDATED The new iPhone 6 and iPhone 6 Plus will include support for NFC, Apple has announced. The NFC functionality will let users make Apple Pay mobile payments in stores.

The inclusion of NFC in the new iPhones means that the technology is now supported by all the world’s major phone makers. Woohoo!

“It’s all about the wallet”, CEO Tim Cook said in introducing the new payments service. “Our ambition is to replace this.”

Cook then showed a demo of the new Apple Pay service, showing a mobile phone touched to a payments terminal and the Visa payment approval signalled via an audio tone.

Apple Pay sits within the company’s existing Passbook wallet app and uses Touch ID fingerprint verification, tokenization and an embedded secure element as well as NFC to secure payments. The service will only be available in the US at launch, backed by Visa, MasterCard and American Express plus Citi, Bank of America, Capital One, Wells Fargo and Chase.

Apple’s iBeacon does not appear to form part of the core payment experience and no mention of the Bluetooth Low Energy technology was made during the Apple Pay unveiling — everything points, in fact, to the Apple Pay process involving a standard EMV contactless chip card payment transaction that works with any EMV standard contactless point-of-sale terminal. 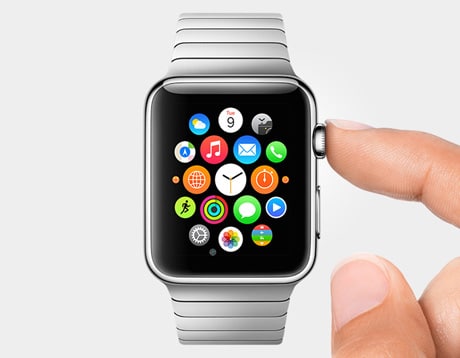 Owners of Apple Watch, the company’s first wearable device, will also be able to use their device to check in for airline flights and open hotel room doors “with one tap”. A Passbook icon shown on the homescreen of the new wearable includes a new, fourth stripe for stored payment cards, suggesting payments capabilities via NFC too — but no confirmation has been given as yet.

UPDATED “Apple Pay will work with Apple Watch”, Cook says. The device will ship in early 2015.

Barclays, Navy Federal Credit Union, PNC, USAA and US Bank will all support Apple Pay “soon”, the information page for the service on Apple’s website reveals, while Starbucks will also accept Apple Pay.

“To pay, just hold your iPhone near the contactless reader with your finger on Touch ID,” the page also explains. “You don’t even have to look at the screen to know your payment information was successfully sent. A subtle vibration and beep lets you know.”

To pay with an Apple Watch, “just double-click the button below the Digital Crown and hold the face of your Apple Watch near the contactless reader. A gentle pulse and beep confirm that your payment information was sent.”

8 comments on this article