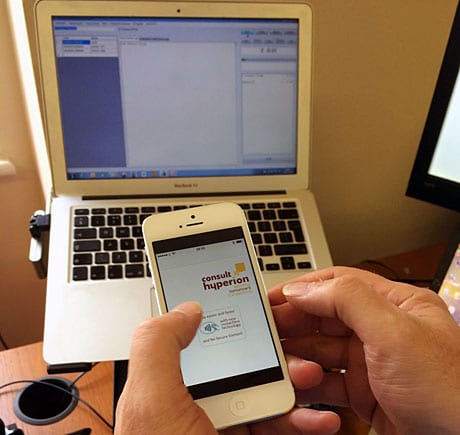 “With Bluetooth Low Energy, what we’re doing is instead of sending all the EMV data backwards and forwards over the contactless interface, we’re packaging it up and allowing the phone to access it over the Bluetooth Low Energy channels,” Stuart Fiske, CTO at Consult Hyperion, explained to NFC World+.

“Once the phone has got that information, it can do the same cryptography and it can send back, over Bluetooth Low Energy, a set of standard response data items which form the other half of the payment transaction. Then the laptop can process all of those EMV data items in exactly the same way as it processes the same EMV data items that it gets from the point-of-sale terminal.

“We’ve put the same software into an iPhone so we can now do the same thing with an iPhone as we can with an Android phone. That’s great because it means that, not only does it open up the whole iPhone market, but it also means that we can go back to earlier versions of Android than 4.4 and we can do this kind of stuff without needing the latest version of the Android operating system,” Fiske continued.

A significant amount of work will be involved in turning the proof-of-concept into a commercially available solution, however, he added.

“We’ve put together a proof-of-concept and a demonstration, which means we’ve made some decisions about how it would work. For it to become commercially viable those decisions would need to be ratified or made by standards bodies, so there would need to be an element of standardisation in the industry.

“The other thing to get this out into widespread use is that retailers are going to have to either do something to their existing hardware to support this or upgrade hardware as change cycles come through, and that can take seven, eight, 10 years. This isn’t a quick thing, it’s going to grow over time.”

“Host card emulation, the ability to do EMV transactions in software, should make it much easier for issuers to roll out this kind of technology and it should jump start mobile payments using EMV,” Fiske added.

“There are an awful lot of alternative solutions out there that don’t use EMV and they are going to run up against the issues of getting those solutions integrated into the backend banking systems. That’s something I think a lot of people underestimate when putting together these new payment possibilities.

“At some point, the integration costs into the legacy backend banking systems will mean that some solutions will be easier to integrate than others and those will become dominant. I think there will be winners and losers, and I think anything built on EMV will be a winner because it has a huge head start because it already integrates into the legacy infrastructure.

“It may well be that we end up seeing a hybrid solution where host card emulation is used for the softer things but some issuers want to use their hardware secure element for the actual payment, and you may see Bluetooth Low Energy being used as part of that interaction and contactless being used for another part of it as well. But welding all of this together and pinning it with EMV is a way that makes it possible.”