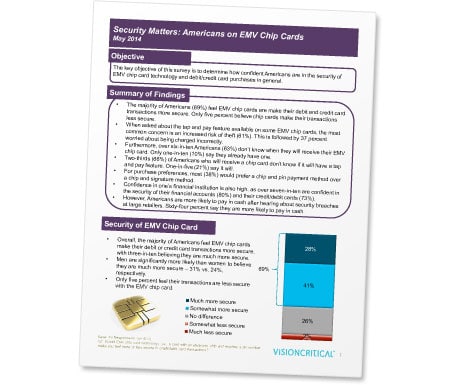 The Security Matters: Americans on EMV Chip Cards (PDF) survey, based on the responses of 1,000 American adults, also found that the most common concern expressed regarding contactless cards was the increased risk of theft (61%), followed by 37% expressing concerns about being charged incorrectly for purchases.

Some 38% of respondents said they would prefer chip & PIN while 26% prefer the idea of chip & signature, while 36% say its makes no difference which is used.

“From this survey, we see a high consumer awareness of EMV chip card security and readiness to adopt secure technologies that protect credit and debit card purchases,” says Brintha Koether, director of payments at NXP Semiconductors.

“We recognise the sensitivity and loss of trust consumers immediately feel after learning of a major security breach. We have seen how secure chip technology employed outside the US drastically reduces fraud as well as building consumer confidence in card transactions, financial institutions and retailers.”