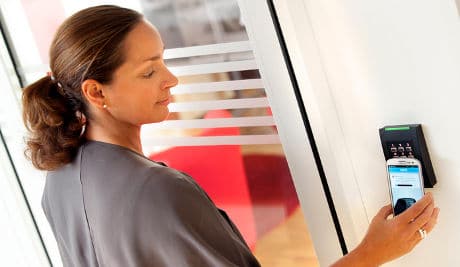 ID card provider HID Global has begun beta testing a new version of its Seos mobile keys platform that adds Bluetooth Low Energy (BLE) support to its existing NFC functionality. The addition means that users will also be able to use their mobile phone to access services, such as car parks, that can benefit from a longer read range than that provided by NFC, HID’s Sylvia Edmands has told NFC World+.

Three companies are currently piloting the new platform with about 80 users ahead of a planned launch to partners later this year.

“What we are trying to do is open doors, open readers, gain access into buildings using a mobile phone. In the past, ourselves and also other players in the market have been trying to do that using NFC. What Bluetooth gives us in addition to NFC is longer reach distance.

“We think that is going to be really interesting for people trying to use it to open gates in parking garage areas for example, or car parking areas. Also in warehouse areas where you are trying to move through doors and you don’t want to leave a load in the centre of the road and walk around and open the reader.

“Another application for it could be remote buildings where you would want to place the reader on the inside of the door to protect against vandalism or excessive temperatures. Those are really applications where Bluetooth adds a lot of value because it has the longer reach.

“What Bluetooth also offers is iOS support and a lot of our customers in the past, when we have talked to them about mobile access, thought it was a shame that they couldn’t use their iPhones. We can now, with Bluetooth, also support the iOS platform.

“We started to develop before host card emulation (HCE) became available and therefore, for us, NFC and the time to market was slow because of the integration with third parties. That wasn’t really a viable way forward.

“So, we started experimenting with Bluetooth and realised there are a lot of really good applications that you can do with Bluetooth as well. Now that HCE is available, we really support both.

“It really depends on the customer; if they have a lot of iPhones they want to use, then I am sure iOS is a good way of opening doors. If they actually just want a tap-in experience, or they want to use maybe garage access with longer range, then maybe Bluetooth on the garage and NFC on the rest of the doors. But it really depends very much on how the customer wants to use it and how the site is laid out.”