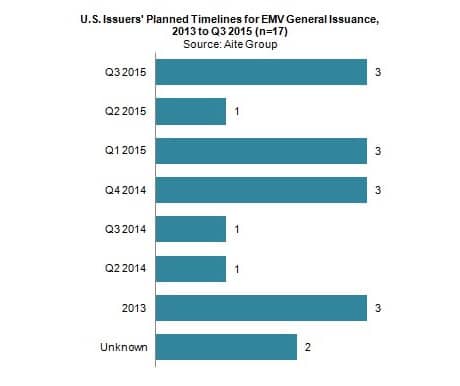 Some 70% of US credit cards and 41% of debit cards will be EMV enabled by the end of 2015, according to a new Aite Group report, but the majority will be contact cards rather than dual interface cards that also support contactless payments.

Adoption will be driven by rising counterfeit card fraud plus “the increasing difficulty that US cardholders have in using their magnetic stripe cards overseas, the desire to accelerate the US terminal infrastructure upgrade to facilitate NFC-based mobile payments technology, and the decreasing cost of chips and terminals,” Aite says.

The majority of card issuers are choosing to issue contact smart cards only initially, Aite found, rather than dual interface cards that support both contact and contactless transactions.

“Drivers of this decision are cost, a desire to keep the initial deployment as simple as possible, and a belief that the merchant infrastructure will not yet be ready to support contactless transactions in any great scale by the liability shift date,” the analysts say.