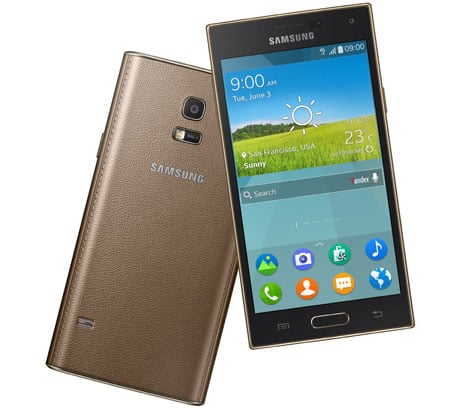 Samsung has announced the first commercially available phone based on its Tizen operating system, and it will come with NFC. The Samsung Z is a 4.8-inch touchscreen smartphone with a 2.3GHz quad core processor and 2GB of RAM, and boasts high-end features including a fingerprint sensor and a heart rate monitor.

The Samsung Z features Bluetooth 4.0 with BLE and an infrared blaster, and runs Tizen 2.2.1.

Design-wise, the device “features a slim, angular design with sophisticated lines” and will be available in black or gold when it ships — initially in Russia — later this quarter.

Tizen is a free open-source mobile operating system based on Linux. Development is led by the Linux Foundation and guided by the Tizen Association, members of which include Intel, Samsung, NTT Docomo, SK Telecom, Orange, Vodafone and Huawei.