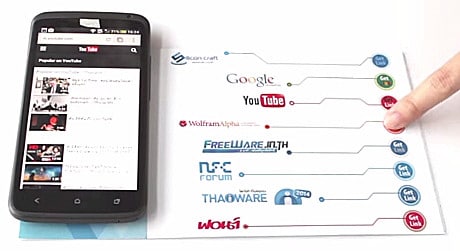 Thailand-based technology provider Silicon Craft Technology (SCT) has shown off a low-cost interactive poster that contains multiple touchpoints, enabling one NFC interface to be used to provide consumers with a range of content, coupons and offers from a variety of different promoters.

The new smart posters make use of SCT’s SIC4310 chip, a passive transponder that uses the energy produced by an NFC interaction to power up electronic components such as LED lights and, in this case, between six and eight capacitive sensors.

Consumers place their NFC phone on the poster and then press the touch sensitive button located next to the offer or information they wish to receive. They can then remove their NFC phone or leave it in place and touch additional switches to receive further offers.

A video shows the technology in action:

The solution is currently at the prototype stage with developer units costing around US$15 each, SCT told NFC World+. “However, we are now developing the new version by using PET, and the target cost will be less than US$1.”