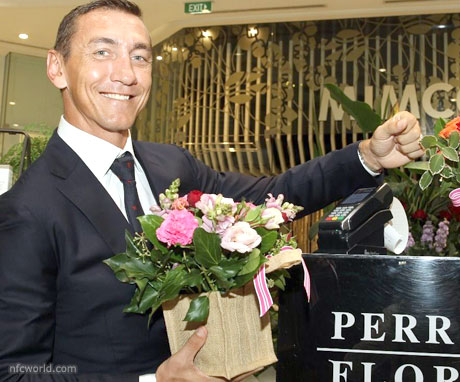 Australia’s Heritage Bank has unveiled prototypes of a suit that comes with an embedded NFC chip and antenna to allow its wearer to make NFC payments at contactless POS terminals by simply swiping their sleeve.

Tailored in Japan by menswear label MJ Bale, the NFC chip in the Heritage Power Suit holds a Visa Paywave prepaid account that the wearer can top up on-the-go via the Heritage mobile banking service.

Heritage and MJ Bale have produced twelve NFC Power Suits as a trial run designed to test and show off the concept. Eleven of the prototypes have been released to customers around the country while the twelfth is being auctioned for charity on eBay.

Depending on how well the prototypes test, the companies say they will “look at making more suits available in future.”

“Have you ever noticed that the world’s most powerful men don’t carry a wallet?” asks a video showing how the suit is used to make payments. “It’s wearable technology that a gentleman would actually wear.”

“As a customer-owned bank, we’re always keen to find new ways to make banking more convenient for our customers,” says Heritage Bank. “We’re always on the look-out for other exciting ways to use wearable payment technology. Stay tuned!”