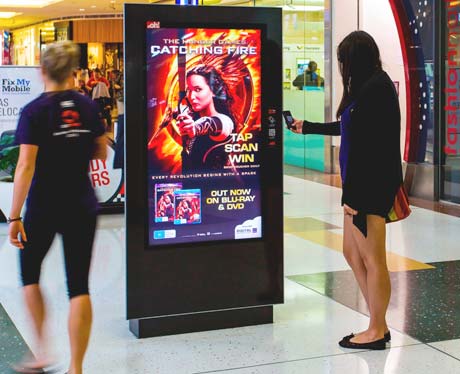 The DVD release of the latest instalment of The Hunger Games movie franchise is being promoted in shopping centres in Australia via digital media panels that “catch fire” when a shopper uses their mobile phone to access a game based on the movie.

Each time a consumer interacts via NFC or QR with a panel promoting The Hunger Games Catching Fire DVD all of the other panels within that Westfield shopping centre will appear to burst into flames. A video shows the two second animation:

The campaign is being run by Ooh! Media for cinema chain Village Roadshow across 77 digital and static panels in Westfield shopping centres across the country’s eastern seaboard, as well as on 142 static panels nationally.