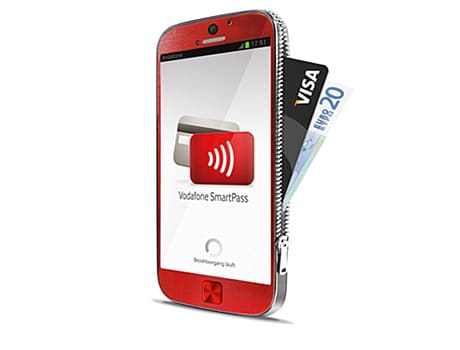 The service is integrated with MasterCard-owned Trevica’s TSM platform, which is designed to make it easy for German banks to deploy NFC payments to Vodafone, Deutsche Telekom and Telefónica Deutschland subscribers, and is available to customers with any of more than ten NFC smartphones including models from Samsung, Sony, HTC and LG.

Non-customers and subscribers without an NFC phone can also sign up for the service. They will be issued with SmartPass stickers that can then be used to make payments at any of 36,500 contactless acceptance points in Germany — including Galeria Kaufhof, Karstadt and Starbucks outlets — as well as at contactless points of sale abroad.

The ability to store customer loyalty and membership cards is also to be added “soon”, Vodafone says. The carrier is demonstrating NFC versions of the ADAC automobile club membership card, Payback rewards card and Lufthansa Miles & More loyalty card at this week’s Cebit show in Hanover.

The national launch in Germany follows an initial launch in Spain in November 2013. Rollouts are also due to take place in the Netherlands, UK and Italy in the near future.