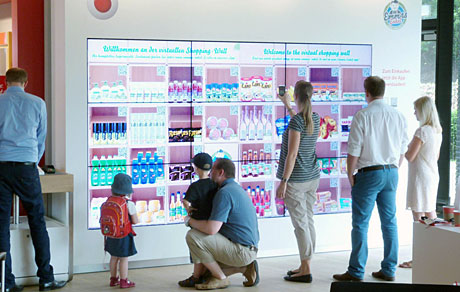 Mobile network operator Vodafone is testing a mobile shopping wall at its German headquarters in Dusseldorf, enabling 5,000 staff to select grocery items using QR codes and then pay via NFC.

To use the service, consumers download grocery retailer Emmas Enkel’s mobile app and scan the QR codes located by each product displayed on the 3m by 2m Virtual Shelf. They are then directed to the retailer’s website where the scanned product is automatically put into their online shopping basket for later collection or delivery.

Once they have completed their shopping, testers have several options for making payment. They can pay online via debit or credit card, at a store location when picking up the order, or by paying the driver when the shopping is delivered.

They can also use Vodafone’s SmartPass app to pay with NFC, via an Ingenico self-checkout terminal located beside the shopping wall or at Visa Paywave terminals located in the retailer’s stores.

“We are combining the traditional grocery store with the online store,” Bruser continued. “We invented the idea and we developed the Virtual Shelf in partnership with Vodafone, who supplied the LED screens for the display and helped us in making our idea become a reality.”

The Virtual Shelf is based on an array of monitors so does not include NFC tags in the display itself — something which is much more easily achieved with printed shopping walls. “It doesn’t currently have any NFC chips but NFC would be the next step to include in the Virtual Shelf,” says Bruser.

“There will be five or six more in the next six months as more companies are asking for it where they can’t get a physical store,” Bruser added.

A video, in German, shows how the Virtual Shelf system works: