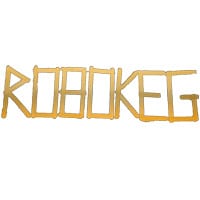 Consumers tap Robokeg’s NFC reader with a contactless wristband that holds driving licence data, credit card details and their phone number. Robokeg then confirms the user can legally purchase the beer, sets the device to pour a glass and then sends a bill via SMS to the user’s phone.

The beer keg is powered by a Raspberry Pi computer which communicates with the NFC reader before driving a small motor to pour the beer.

Robokeg says it hopes the concept could one day act as a vending machine at festivals and events to reduce queue times and eliminate the need to carry cash or a mobile phone.

Robokeg will also recommend a beer based on the current weather and can post to the user’s Twitter account each time they purchase a drink from the machine.

The automated bartender was developed at the Techcrunch Disrupt NY 2013 hackathon, where it was caught on video.