The vWand is designed to act as a data bridge, enabling users to read data stored on contactless ID cards and other media and forward it on to standard PCs and mobile phones via Bluetooth. 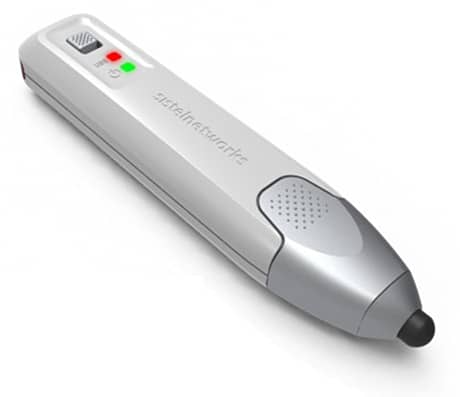 The Spanish company’s vWand is a chunky rubber tipped stylus with built in NFC and Bluetooth radios. The marker pen sized device acts as a bridge, allowing users to conduct an NFC operation using its built-in reader and then relaying data via Bluetooth to the tablet or smartphone.

Sistel envisages the vWand being used in applications including education, medical history, inventory, and logistics.

The vWand can handle NFC peer-to-peer, read and write and card emulation modes, and communication with the host device is via Bluetooth 2.1. An on-board lithium polymer battery can power up to 25,000 reads or writes on a single charge, and charging is via a standard micro USB connector.

“When designing the vWand, we were seeking a natural user experience,” says product manager Jorge Marcos. “It provides a comfortable use of NFC, especially for tablets, given that the user can read or write NFC tags with the same device that is using to interact with the touchscreen.”

UPDATE Asked about pricing and availability, Marcos told NFC World “We have launched the first model, but there will be different versions adapted to specific requirements of each application. Price will depend on the version. As a general idea, for retail in mass production it would be around €120 to €150.”