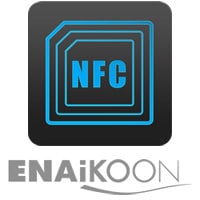 When a tag is scanned with an NFC phone running the inViu NFC-Tracker app, the device displays information stored on the tag and also sends it to Enaikoon’s inViu Pro servers. A subscription-based web portal then allows managers to view, analyse and share the collected data from any web browser.

Enaikoon illustrates a typical use case, that of a company contracted to regularly empty waste bins in a park. Without any sort of tracking, some bins may be missed and there is no way to show when a particular bin was last emptied, Enaikoon says. Using the inViu NFC system, a tag can be attached to each bin and the worker would scan them as each was emptied.

Each tag could additionally bring up information on the location of the next bin to be emptied. The handset transmits information identifying the tag back to Enaikoon’s servers — or holds it until a connection is available — where it could be analysed and reports generated to demonstrate that the contracted work has been done. Detail could include the time and location of each bin emptied, along with the identity of the worker that did it.

“The NFC tracking system is low cost compared to other tracking systems as the only hardware needed is an off-the-shelf NFC-capable Android smartphone,” says the company, and a single device can be shared by multiple users because the app identifies each with a PIN.

The system is also well suited to use within buildings, says Enaikoon, because it does not use GPS and individual NFC tags can be permanently assigned to a particular location in the inViu Pro back end.